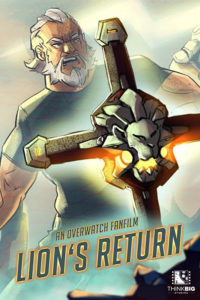 Lion’s Return is a live action Overwatch cinematic short film by Think Big Studios based on the original game characters of the Overwatch video game by Blizzard Entertainment. It tells a fan’s interpretation of how Reinhardt was introduced into the current story world of the game. Reinhardt’s character map Eichenwalde is the setting of the events. The narrative pick up and incorporate elements, memes and scenes of the Overwatch story world and their characters.

Subscribe to our newsletter and stay up to date about all the latest news like screenings, releases and announcements around the movies of Think Big Studios.

Take a look behind the scenes of our Overwatch cinematic short “Lion’s Return”.

This is an necessary category.

Marketing cookies are used to track visitors across websites. The intent is to display ads that are relevant and engaging for the individual user and thereby more valuable for publishers and third party advertisers.

Subscribe to our newsletter to stay up to date on all news, announcements and releases from Think Big Studios.